Going to Edvard Grieg’s house has been on my list of things to do ever since I’ve come to Norway. Grieg is the most well-known Norwegian composer, writing music such as “Piano concerto in A minor” and the music to “Peer Gynt” (even if the name doesn’t sound familiar to you, I guarantee you have heard something from “Peer Gynt” since the music is frequently used in movies/TV shows/commercials). He was also a great pianist. Grieg was born in Bergen, and later in his life, built his home just outside of Bergen near a scenic lake. His house is called Troldhaugen.

I almost ended up not going to Troldhaugen because I couldn’t figure out how to get there. The Bergen Light Rail, what? I can’t tell you how long I walked around looking for the Light Rail. Turns out I had walked past it countless times; it was what I had thought was the tram system. Oh well.

I first went through the small museum they have for Grieg. In some weird hidden hallway I found a bust of Grieg that had been sculpted by Gustav Vigeland, Norway’s most famous sculptor and the guy who made all the sculptures in Vigelandsparken in Oslo. I love when famous Norwegians all know each other. Turns out that Grieg was not a huge fan of Vigeland, however. 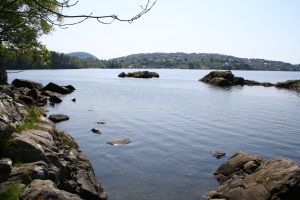 After the museum I walked through the small forest surrounding Grieg’s house, down to the lake. He certainly built his home in a great spot, since he has a beautiful view over the water. I also found Nina (his wife) and Edvard’s grave, which was built into the side of a cliff near the water. I thought it an odd placement for a grave. 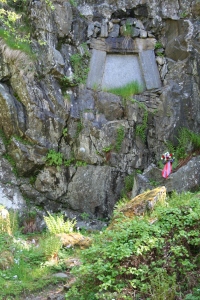 Next I walked through Grieg’s house. I really wanted to take a picture of his piano, but unfortunately we weren’t allowed to take pictures inside the house.

So I took one while standing outside the house. Is anybody really surprised by this? I’ve done it several times before.

I also walked down to Grieg’s composer hut (would totally live in there; it was awesome) and past the concert hall, which sadly was under construction.

After chilling with the statue of Grieg for a while, I headed back into Bergen. I found a statue of Ole Bull, who is probably Norway’s most famous musician (violinist, kind of crazy as it turns out–he established his own colony in the US), did some shopping in the stores in Bryggen, then wandered through Bergen’s fortress.

Afterwards I headed back to the hostel and met a nice girl from England. We chatted for a few hours while watching the sun set over Bergen.