ometimes when things go wrong, they actually turn out better than you expected. Today was one of those days.

I was supposed to take a boat tour of Hardangerfjorden, but I forgot that I was supposed to buy my tickets before going on the tour. I tried to do so the morning of (since they say I would be able to), but the office didn’t open in time. Afterwards I wandered around for a while until the tourist office opened, then I talked to them about any other fjord tours open that day. 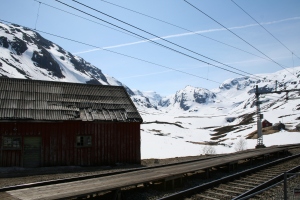 They sent me instead on a tour of Aurlandsfjorden and Nærøyfjorden. I was quite happy with this because Nærøyfjorden was a fjord I wanted to go down, since it’s on the UNESCO Heritage List and is supposed to be absolutely stunning. 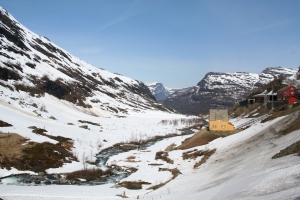 In order to get to these fjords, I first had to take a train from Bergen to Myrdal. Being such a small world, I ended up running into a girl I know from Oslo, who is also from Minnesota, on the train. It was random, but nice to catch up with her.

The train to Myrdal took me through valleys surrounded by mountains and lakes everywhere. By the time we arrived in Myrdal, we had ascended quite high into the mountains, so I suddenly found myself thrust into a winter wonderland.

Even though the snow was beautiful, part of me was completely horrified. See, once I say goodbye to the snow, I expect to not see it until winter. Seeing it in the end of May was just disturbing to me.

We had about an hour in Myrdal until taking the next train, which was far too much time because the only thing in Myrdal is a train station and about four houses. Yeah. I took more pictures of Myrdal than there are buildings in Myrdal. 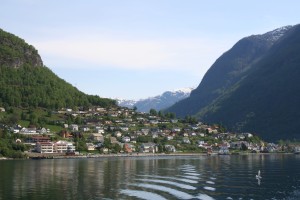 After putzing around for an hour, I took a train from Myradl to Flåm. This train ride was also spectacular, and we passed towering mountains and rushing waterfalls. I didn’t get any pictures from this leg of the trip since I wasn’t lucky enough to get a seat right by the window. If I had had time to walk through the Flåm Valley, I definitely would have.

In Flåm I hopped on a boat, and then we went down Aurlandsfjorden. As soon as the boat left the harbor, a ton of seagulls started following our boat and crying. The Asian tourists thought this was the most adorable thing ever. They laughed, they pointed, they took pictures, and then they fed the seagulls bread for thirty minutes. 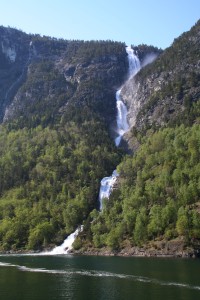 I swear they took more pictures of the birds than of the fjords themselves. I have no hope left for humanity.

After cruising slowly down Aurlandsfjorden for an hour, we turned into Nærøyfjorden (which means “narrow fjord” in English). Nærøyfjorden is the most narrow fjord in Europe, and is absolutely stunning. I’m a little bitter I didn’t get a view looking down the fjord when we first turned into it, because it was so cool. You could look down the fjord and see snow-capped mountains in the distance.

But, I took a lot of other pictures of Nærøyfjorden, so here you go. I’ll let the pictures do the speaking for me, especially since I need to catch a plane to Belgium in a few hours (note–I’m behind in the posts so don’t take the date posted as the date this stuff actually happened). 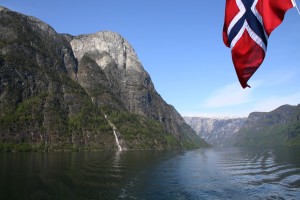 At one point we passed this farm which was situated high up on the mountains. We were told that the path up to this farm from the water is so steep that in the old days, they needed to use a ladder.

I just don’t understand how they built it, then.

At the end of the fjord, we hopped on a bus. We ended up driving down the Stalheimsklevia road, which is the steepest road in Norway. There are 13 hairpin bends on the road, which makes driving down it a nightmare for a bus driver. Poor guy. 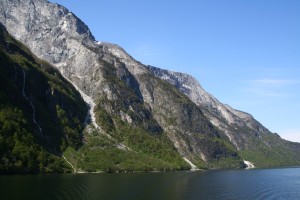 At the end of the road, people on the bus started clapping for the bus driver. I can understand why they did this, since I’m sure it was very stressful and difficult for him, but at the same time I can’t understand it. I mean, he’s a bus driver, it’s his job to not drive us off the cliff. Would we not clap had he almost sent us to our deaths?

The bus arrived in Voss, where we changed for another train back to Bergen. This tour ended up taking all day–about ten hours, so I was quite tired.

If you ever get the chance to go to Norway and see the fjords, I recommend it. Pictures can’t do them justice.