It was with a heavy heart the next day that I left Scotland. I wish I could have spent more time in Scotland, since it was absolutely beautiful and Scottish accents just sound so nice.

At least I was going to another place with lovely accents–back to England! Last time I was in England I didn’t have enough time to go to Stonehenge, so this time I went back to Bath to go see all those stones.

I left for Stonehenge early in the morning since I was taking public transportation to get there and it was going to take a while. First I had to take the train from Bath to Salisbury, and from there I took the Stonehenge tour bus through the countryside to the stones.

Even though I had left Scotland, those damn fairies were still following me around and causing me problems. Today’s problem? The weather. 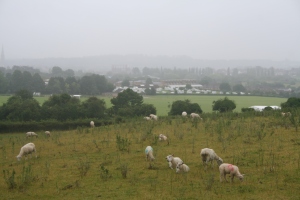 Good lord, so bad. It poured all day, and it was miserably cold. Combine that with only a thin jacket and a umbrella unable to withstand the strong blasts of wind, and you can understand why I was not such a happy camper.

The fury of England had escaped me up until that point, but I couldn’t outrun the miserable weather forever.

I got off the bus at Stonehenge and hurried under the road (fun fact–there’s a road that runs right next to Stonehenge) over to Stonehenge. I was only outside for 0.2 seconds before I was completely soaked through to the skin, so I went through all the information pretty quickly since I was freezing.

Not much is known about Stonehenge. There were three different Stonehenges, the first being just a raised mound and a deep ditch, and the third being what you see today. The number of times it was built is indicative of its importance–although we don’t know exactly why it was important. 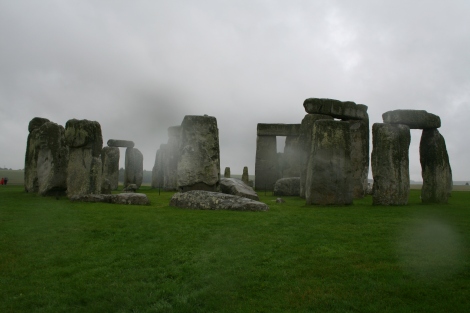 The Stonehenge standing today is made of two different types of stone, bluestones and sarsen stones. Bluestones are supposedly warmer than other stones, although I touched both a bluestone and sarsen stone and they felt like the same temperature to me. Maybe I’m just incapable of feeling sensitive temperature differences after handling boiling hot flasks of agar all the time.

If you split a bluestone open, the rock is blue with white flecks, hence the name. The bluestones came from Wales, something like 240 km away from the site of Stonehenge. It’s unknown exactly how the bluestones were transported since they’re not exactly light stones, but historians think that the stones were rafted. Apparently in recent times, I think around 2000, some people tried to raft bluestones to Stonehenge to recreate the making of Stonehenge. It was an epic fail, and the bluestones ended up falling into the water.

So if you ever have a bad day when everything just seems like it’s going wrong, at least you can take comfort in the fact that you didn’t fail to do something people successfully did back around 2600 BC.

The sarsen stones are bigger than the bluestones, and they came from much closer, only about 40 km away from Stonehenge. Still, it’s unknown exactly how they were transported because these stones are MASSIVE, although historians think people may have used rollers.

But then they had the problem of raising the stones when they got them to the site, especially the ones resting on top of other stones. When I say these stones are massive, I mean that the heaviest stone weighs 45 tons.

So, theories? Insanely ripped people back in ancient times? Aliens? The Doctor? 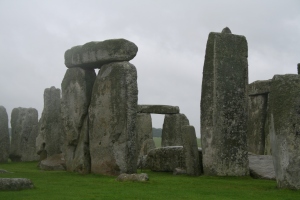 Then you have the four Station Stones that rest inside the inner sarsen circle. Okay well today you only have two Station Stones, but there used to be four. Nobody today knows why they were there, but if you draw lines connecting all four stones, you’ll have a perfect rectangle.

Clearly Stonehenge was important because a ton of effort was put into creating it. But why? What purpose did it serve?

But it’s cool because you can use Stonehenge as a calendar. Based on where the sun is shining on the stones, you can tell what month it is. On midsummer the sun shines through onto the altar stone, which is in the center of the circle.

How awesome! Seriously, can I meet whoever created this? It’s just so… AWESOME.

Sorry, the geek in me was rearing its ugly head then.

One last thing about Stonehenge–on one side of the circle, outside the circle, there’s a stone lying down in the grass. It’s called the Slaughter Stone because it’s red–not because people slaughter animals on it on a daily basis, but because there’s iron ore in the stone itself.

Also I would just like to state for the record that the Slaughter Stone did not look red to me. It looked grey. Maybe that was just because it was raining though, or maybe my eyesight is even worse than I thought.

After Stonehenge, I went to Old Sarum, which is the earliest settlement of Salisbury. Today it’s just ruins, but it was still interesting to walk around, especially because you can see the entire outline of the church that once stood there. 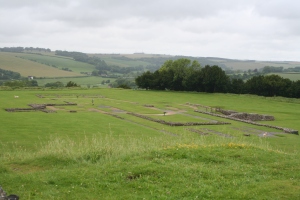 I booked it around Old Sarum (freezing, remember), then headed back to the train station. Since I had a little while to wait before the train to Bath arrived, I popped in the coffee shop at the train station to buy hot chocolate.

And the fairies struck again, since they were out of hot chocolate.

I was not amused.

I was amused, however, at what happened later. When I was waiting for the train to come, I sat down on a bench and read my book, which was suffering from severe water damage. After a while a young man came and sat down next to me. When the train to Bath arrived, we both got up and got on the train. I sat down in a seat next to the window, and the same young guy sat next to me.

I was like lol heyyyyyyy there. And it’s not like it was the only seat that was open–there were plenty of open seats.

I thought it was funny.

When I got back to Bath, I bought hot chocolate (hallelujah!) and warmed up, and then I felt a million times better.